We were really excited going to Rome for so many reasons and we have finally arrived there! We landed to the Fiumicino airport which was located about 30km away from Rome. This wasn’t a problem because Italy is famous with it’s railway system and fast trains. That’s why we have immediately took the direct train called Leonardo express straight to the city of Rome. It costed us 14 Euro which is pricey, but you get what you pay for!

This time we booked a hotel called Hotel Otium Rome – I was really surprised that hotels were really cheap in Italy at the moment we were booking it. It was just 230 Euro for 4 nights including city tax. For this amazing price you get nice interrior design as well as great location which is in a calm place but actually really close to everything including the metro and bus stations. 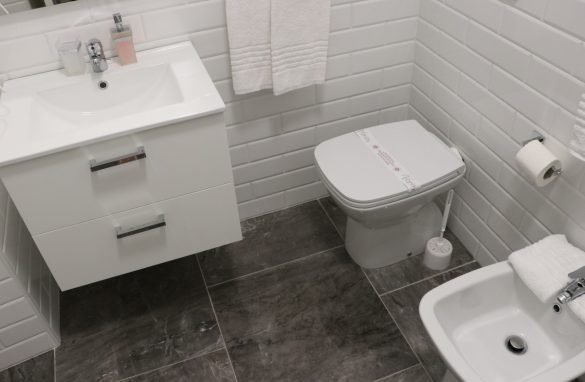 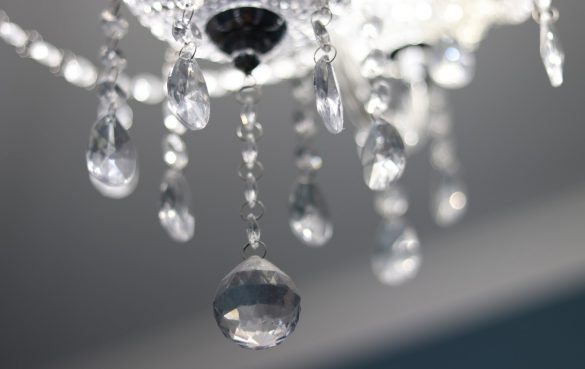 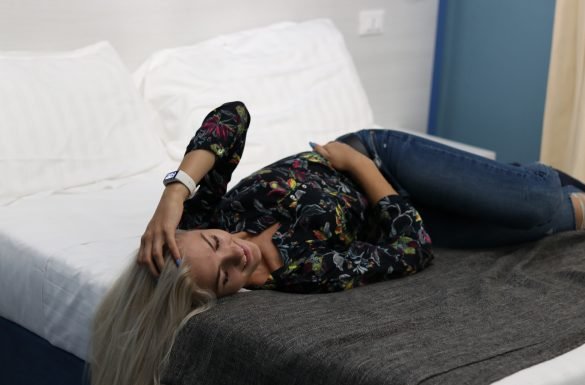 First what we visited was actually Vatican. We chose this on a first day because it was just 1,5 km away from our hotel. Personally I didn’t expect Vatican to be that small! Compared to Monaco my first smallest country I have visited it’s still like a small cake. However even it’s so small there is so much to see! If you will go to museums you can spend there all day easily. Just be aware of huge waiting lines, so better go in the morning if you want to go inside the museums. 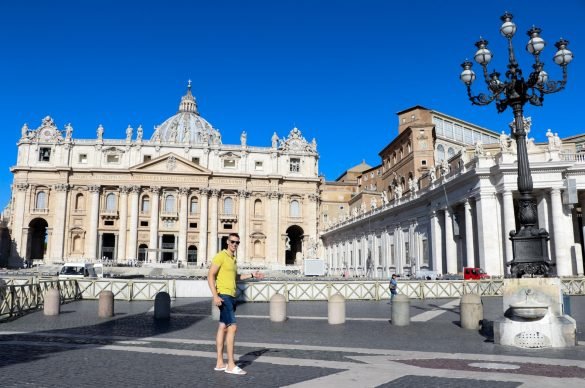 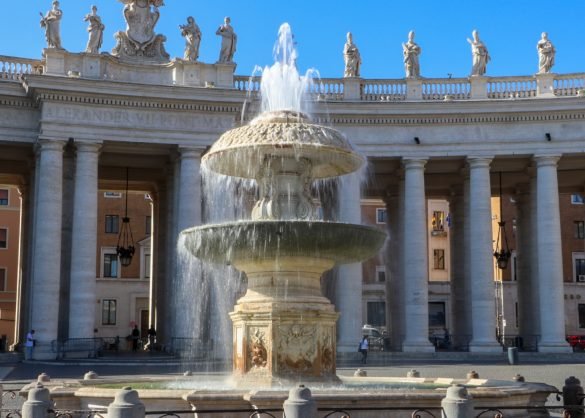 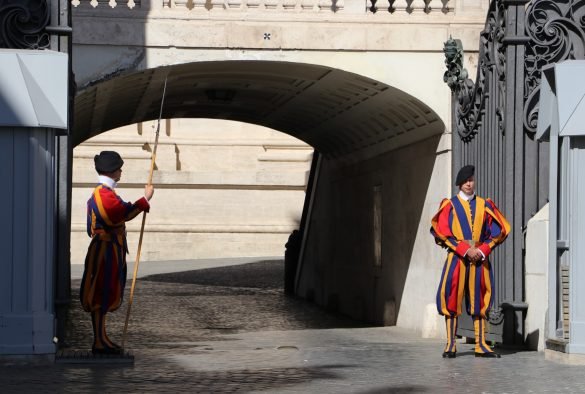 After visiting Vatican we went up to the bridge until we reached Castel Sant’Angelo. We chose this castle because it has a great view when you go up. Don’t worry it’s not that tiring and you can also use elevator if you are too lazy. We were mostly fascinated by the view when you go up, but for castle lovers I can guarantee that you’ll love the inside as well! The entrance cost us 6 Euro each, because we were younger than 25. If you are older than that, it will cost you 12 Euro. 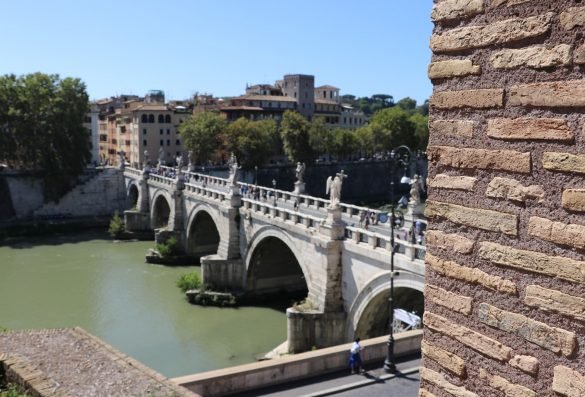 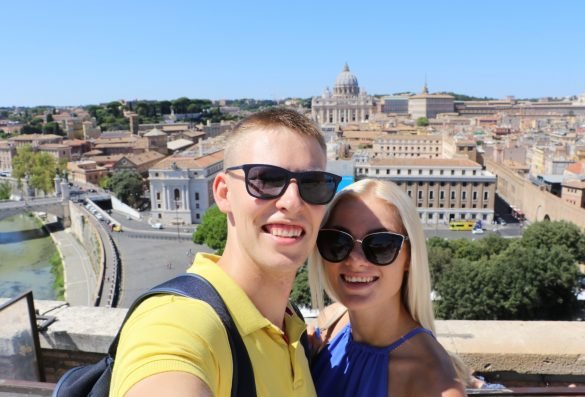 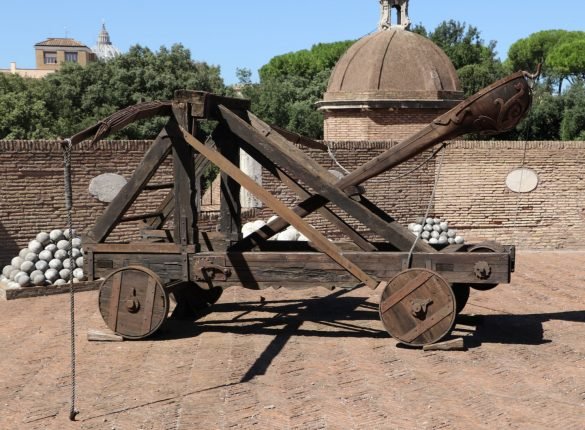 Moving forward you’ll find the famous Pantheon.  It is really crowded, but you can easily see it and enter it without any fee. 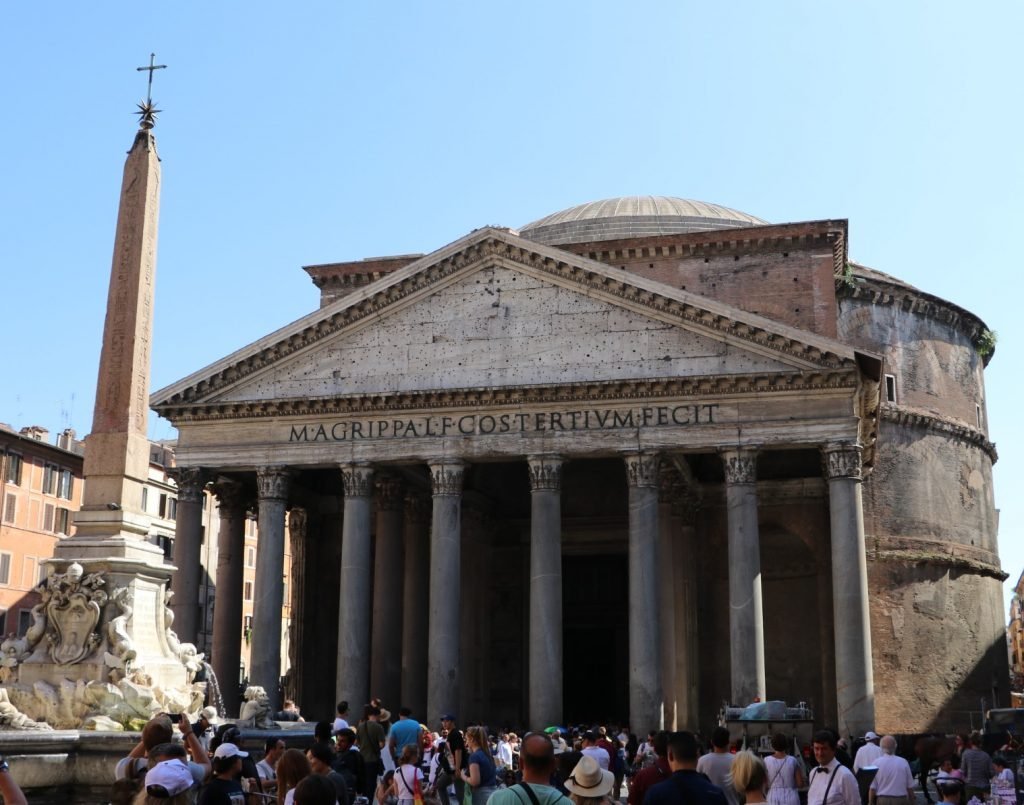 Just 600m away we found another one of the most famous landmark – Trevi Fountain. It’s really beautiful and would be nice to chill next to the fountain a little more, but huge crowds are not making it possible. 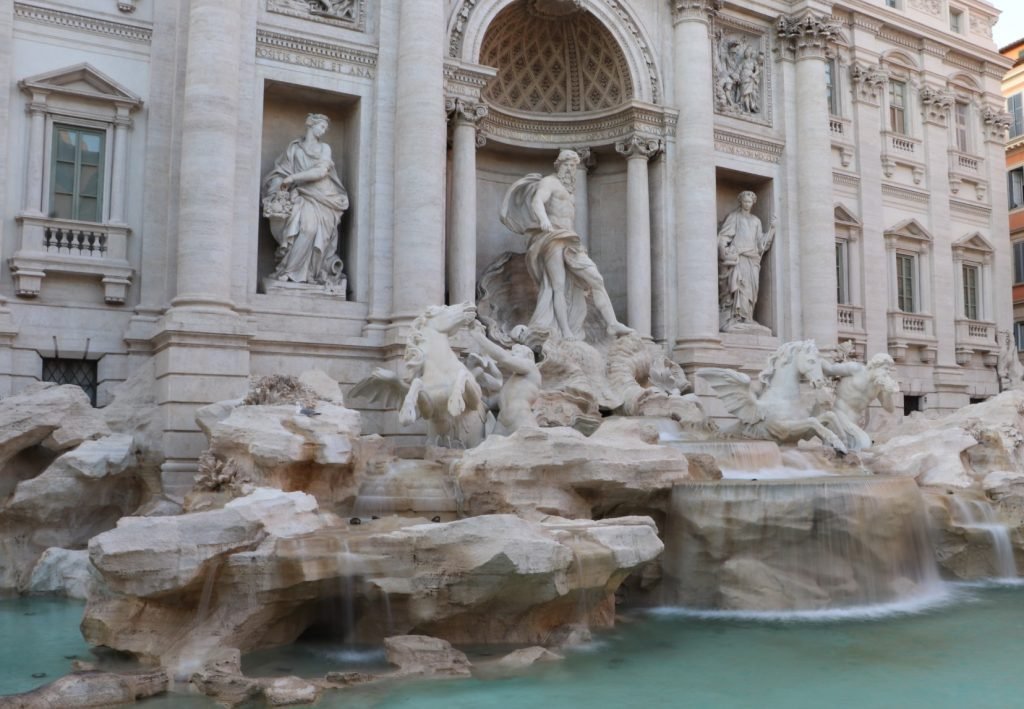 When you are in Rome in every step you make you approach something unique, historical and famous. That’s why after just few minutes we saw another great and famous building – Altare Della Patria which is really close to Colosseum. This building looks shiny and unique because it’s white and enormous size. 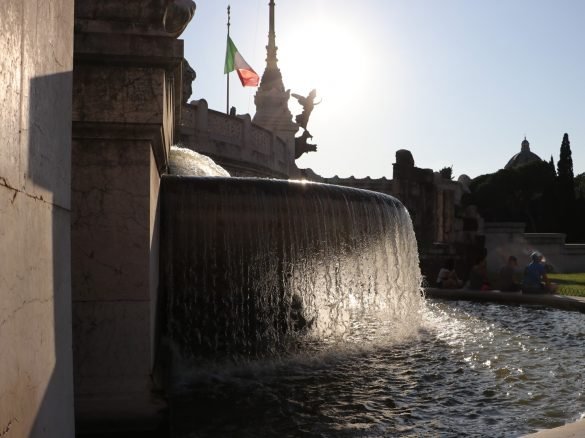 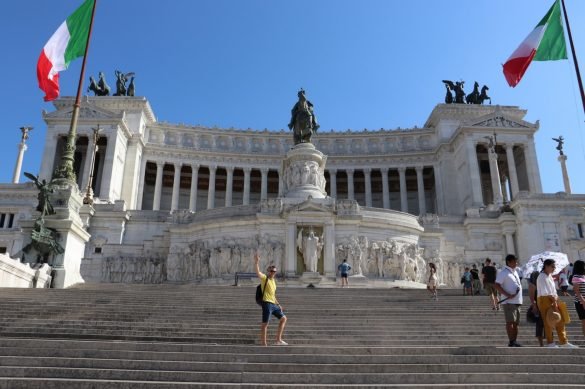 Moving forward we have finally reached our favourite place – Colosseum. This ancient building looks exactly the same as in the movies. It’s huge and very well built. It looks amazing from the outside and you can even see the details that hahve been replaced during the time. 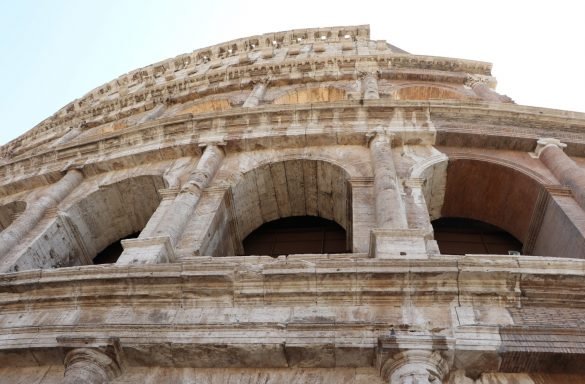 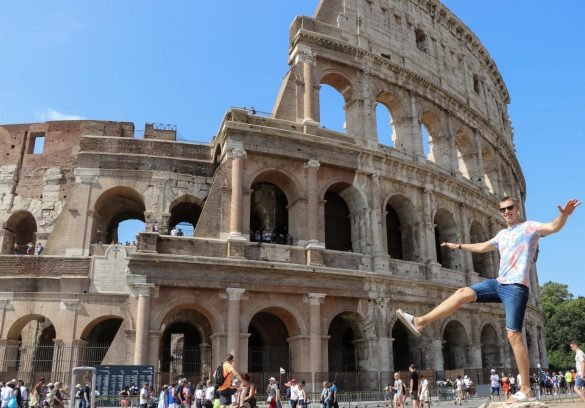 After enjoying the view outside the Colosseum we decided to go inside. We were lucky again, because we had to pay just the half price because we are younger than 25 so it was 7 Euro each. After spending about 40-60 mins in the line we have finally had an opportunity to enter the most iconic symbol of Imperial Rome. It was just wow! Especially when you imagine that there were thousands of people watching gladiators fights. 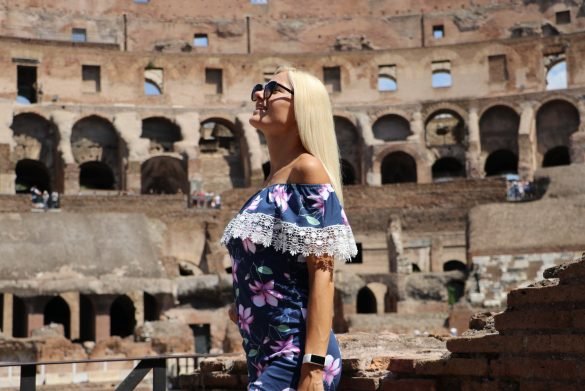 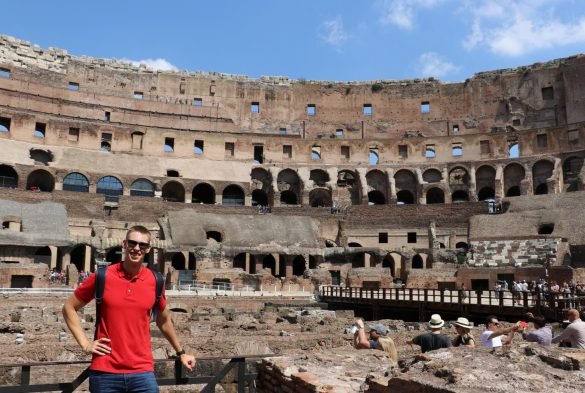 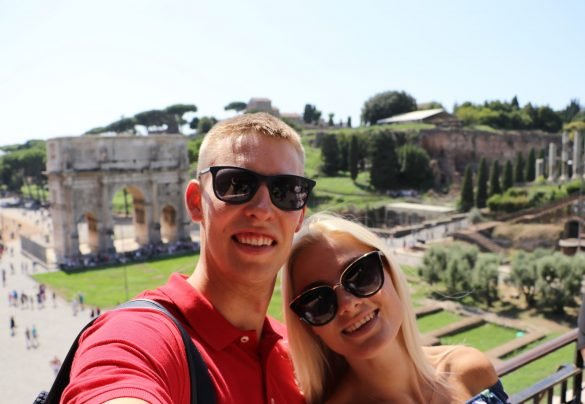 Top View In The Top Of Colosseum

When you buy tickets to the Colosseum you also get access to some other famous landmarks such as Roman Forum and Palatine Hill. If you want to visit and explore all these places you should go there early otherwise split it on two days as the ticket is valid for 2 days. Personally we went to get a dinner after visiting Colosseum and then continued exploring Roman Forum and Palatine Hill. It was a great idea because we were full and happy so we could enjoy without rushing. 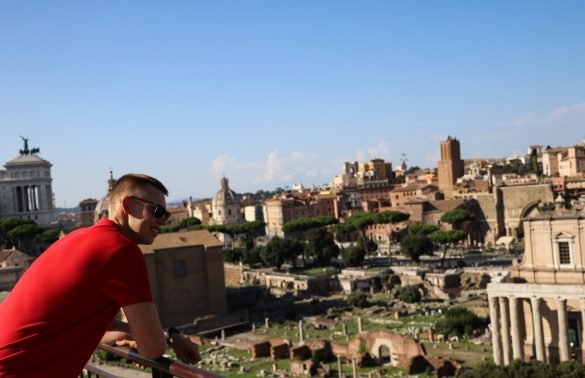 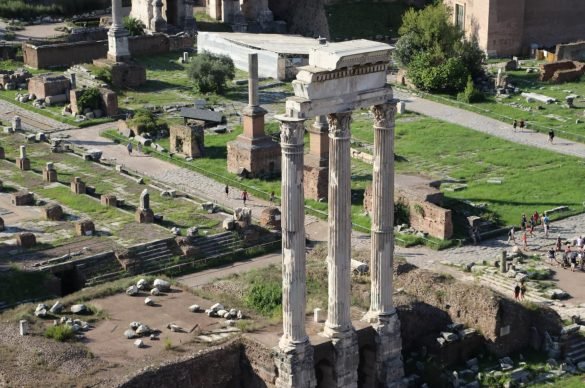 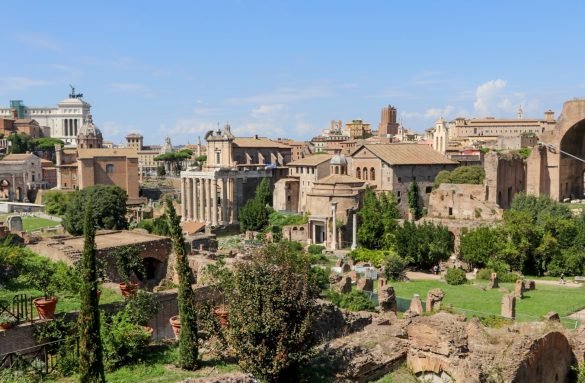 During the evening it was fun and relaxing to walk along the narrow streets, visit random caffes and watch people performing various shows. Walking in the night felt totally safe and cozy with great atmosphere. 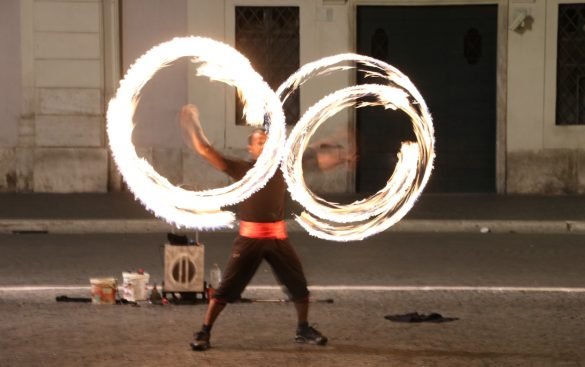 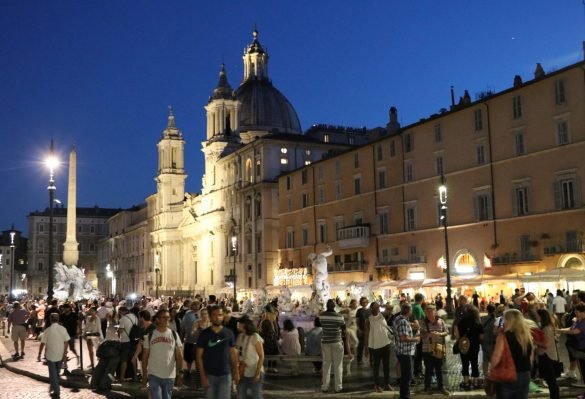 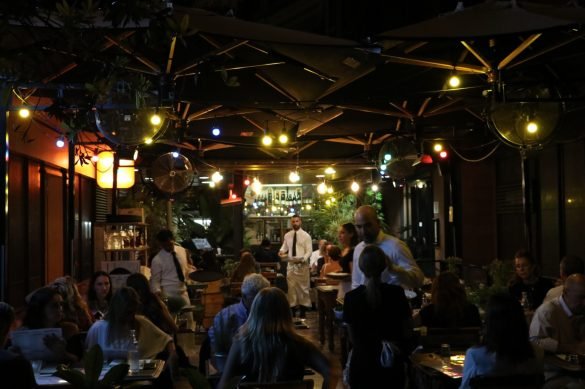 Overall visiting Rome was exciting and interesting, because there is so much to see. Usually cities have few attractions and that’s it but Rome has everything. You simply can’t get bored here!